Founded in 1983, design agency The Partners have a long history of creating iconic branding for internationally renowned companies – from Jaguar to Vodaphone – as well as a knack for scooping some of the industry’s most sought-after awards. In 2015 the studio was tasked with breathing new life into the London Symphony Orchestra, in time with the news that conductor Sir Simon Rattle was to be appointed Music Director. Updating an identity that The Partners themselves had crafted years earlier, the team set about creating typography, animations, photography and design assets to be used across multiple sub-brands. We caught up with creative director and project lead Stuart Radford to find out how the process rolled out.

The logo created by The Partners over ten years ago

Before my time, The Partners did a rebrand for LSO – which is when they created the LSO mark where the letters make up a conductor’s silhouette – so our relationship with the company had been established back then. That original branding had been delivered as a one-off project with a series of guidelines. Although I think they’d done smaller updates in between, this was the first time they had updated their identity in terms of looking at the entire picture. As the LSO was growing, they inevitably had more stories to tell across newer sub-brands – including LSO Live, the record label; LSO Discovery, the outreach and education programme; LSO St Luke’s, their home; and the LSO Development Programme. This existing connection meant that we didn’t need to pitch for the project – they came straight to us, and the work started off the back of a meeting.

The process started with an audit, reviewing how the LSO communicate in line with their brand positioning (this was something that wasn’t being updated), which very much champions LSO as a leading spirit, and from there we were able to define the brief. There were some key findings and observations during that audit process, which really built on the things the LSO were asking for and concerned about. One of the things we were trying to change with the new approach was how the music was represented.

At the time there was quite a traditional approach; the visual was largely quite static, with still images of musicians either playing individually, classic portraits or in typical shots of a music hall and close-up shots of the conductor. This worked for an audience who understand classical music, but if you don’t have that knowledge (bearing in mind we’re trying to reach new audiences) you can’t rely on this kind of imagery so heavily. We were keen to represent the experience in a different way that was more evocative and emotional, capturing the qualities and power of the music. Then we wanted to do that in a way that could bring Sir Simon Rattle into the brand. This mission then became the brief for how we combined those elements into the identity and the brand.

“We were keen to represent the experience in a different way that was more evocative and emotional.”

We also looked at how other London orchestras were presenting themselves, and what they were doing beyond their performances – for example with education or outreach. We did the same for other UK and some international orchestras, including in Amsterdam, Vienna, Berlin and LA. The Amsterdam orchestra’s branding was quite interesting, as it was modern to the point of feeling more like a music festival, while in the UK it was the other way around, only a few were modern.

The website for Amsterdam’s Royal Concertgebouw Orchestra, whose branding is more contemporary than many of its European counterparts

We kept the design team quite small throughout the project – myself and Marc Spicer, the senior designer, with one or two designers supporting us. We also worked very closely with Suzanne Neal, the account director and project manager. In terms of the way we work, first we will sit down and start to look at the creative directions together, defining various areas for us to explore. Then the designers and I will separate and start to think about what that looks like, and how we bring in these various different actions. We will then reconvene to see what we’ve got, focusing on the things we think are strongest, and start to unpack things further, looking at how it would work as a visual identity – from typography to colour palette or tone of voice. What we developed and presented were three different approaches that looked at how we could solve the problem from different angles.

During the audit, we discovered that the LSO has always been a very pioneering orchestra, ever since it was established in 1904. It was the first orchestra to found a record label, the first to create an outreach programme and the first to tour places like the US and China. From this research we started to develop the idea of the LSO ‘always moving’ which became the direction for one of our design routes. This worked with the duality of the phrase, in terms of being both pioneering and – as the orchestra is famed for powerful performances – the idea of being moving in an emotional way too. We presented this initial concept as a film that offered a number of ways we could start to capture Sir Simon Rattle’s expressive movements, and the idea was that he would use his baton to create artworks.

“We discovered that the LSO has always been a very pioneering orchestra, ever since it was established in 1904. From this research we developed the idea of the LSO ‘always moving’.”

A photograph of the London Symphony Orchestra in 1911

Our first experiments culminated in a deck that included visuals communicating the idea of the conductor’s movements becoming like sculptures or art pieces. We worked on different interpretations of the movement (one was with ink for example), for each season. And then another route was more abstract, capturing the emotional qualities of the music. Conceptually the LSO really liked this last route, but they were also fans of a more contemporary approach, so we built on the idea with a more modern angle.

In June 2016, we were able to get some time with Sir Simon Rattle, and we’d decided to record his movements using motion capture techniques. We managed to hook him up to all this gear during a rehearsal at the Barbican, with cameras surrounding him in 360, recording an hour’s worth of movement, with some very accurate tracking data. One of our issues was that this was obviously quite an ambitious idea, and the technology is not cheap, so we managed to partner with Portsmouth University, who have an amazing motion capture department and a brilliant partner company, Vicon, who own all of the equipment. It turned into a real collaboration, and they volunteered a lot of their time to set everything up, program, then clean up the data once we had selected the clips we wanted to work with – it was an invaluable partnership.

Sir Simon Rattle during the rehearsal at the Barbican

In terms of bringing that data to life, we’d decided to work work with digital artist Tobias Gremmler. We had seen his amazing visualisations of kung-fu online, and they were just beautifully evocative of the precision and craft of the movement. He has a way of looking at and interpreting data in unusual ways; capturing the emotional qualities of whatever he’s working with. He’s based out in Hong Kong so everything was done remotely, communicated through conversation and drawings; there were a lot of long video conference calls.

We gave Tobias ideas as to how we thought we could work with the data, but we also wanted to work with him very collaboratively. Rather than being prescriptive we kept our input just as a starting point. For example, we talked about how we could create an animation that would reflect different sounds of the orchestra – from the violin, drums, to the French horn – as materials that could morph from copper to brass to strings. Since he’s also a musician, there were certain ideas that would resonate more with him. He would then go away and work on these concepts as animations.

“We talked to artist Tobias Gremmler about how we could create an animation that would reflect different sounds of the orchestra – from the violin, drums, to the French horn – as materials that could morph.”

Tobias Gremmler’s ‘Kung-Fu Motion Visualisation – the film that had captured the team’s imagination, before they worked together.

Once we got the animations back from Tobias, we made a selection that formed the basis for other designs, such as the typography, which was all created in-house. This was again directly shaped by Sir Simon’s movements. Obviously there were many nuances in his gestures, which we refined down to a more fluid and serene movement, and one which was more angular and aggressive. We created two separate type designs to reflect both of these. For the photography, we once again built on the idea of reflecting motion. We worked with a photographer called Ranald Mackechnie, who captured this beautifully.

What’s interesting about working on something like this, is that you have to take a bit of a leap of faith. It isn’t until we had the final animation that we knew how anything would turn out. Edward Appleyard and his team at LSO were brilliant, trusting us throughout the process with Tobias. Not only did we not know what we were going to get from him, but we also knew that it would inform the way the whole identity worked.

“It wasn’t until we had the final animation that we knew how anything would turn out, as this informed the whole identity.” 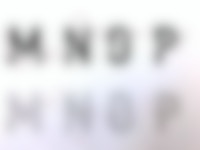 The final designs were split into two typography sets; one echoing the softer gestures, and another reflective of the more angular movements

The final designs were split into two typography sets; one echoing the softer gestures, and another reflective of the more angular movements

At The Partners, our main tools were Adobe Creative Suite programs. Of course, we had to make this identity work across all of LSO’s sub-brands, and it changes slightly in its representation between each. We wanted to reflect different types of movement for different types of music and I think this is where the typography becomes one of the lead assets that enables us to get that cohesion across everything. For example, with LSO Discovery, the outreach and education programme, we played on the idea of giving a window into the music, with more specific stories, and the type forms become that window.

We provided the LSO with visual identity guidelines and assets, with principles on how everything can be rolled out across the main brand, and how it can be used when promoting the different seasons and then how it can change from one year to the next. This also includes practical guidance for how the identity works across different sub brands. For the finished animation, we created a 40-second piece, which became the prelude to the season’s music.

Written by Nils Westerlund
Parts of the Process

Creative Lives
Creative Lives Podcast
Grades don’t matter – it’s what you do: Creative director Malcolm Garrett
In the Studio With

How Penguin Random House’s book covers are born: Meet the Vintage design team
In the Studio With