Feeling the effects of ‘imposter syndrome’ and creative self-consciousness after graduating, Nick Hussain took whatever job he could find. Eventually landing positions at a number of reputable design agencies including StartJG, Eight Inc. and DesignStudio, he began to further hone his skills as a graphic designer. Three years later, he earned a spot in Adidas’ Brand Design Digital department – at its HQ in a tiny rural German town. The move was a life-changing one. Here, Nick explains the pros and cons of being based in such an isolated area, how it has affected his practice, and the revelations he’s had about his career and the factors that drive it. 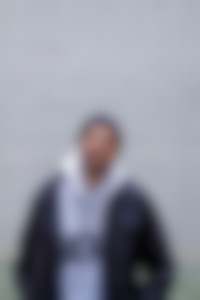 How would you describe what you do?
I am part of a newly formed Digital t­eam within Brand Design at Adidas. Our teams focus is to creatively guide the in-store digital experiences for our key stores around the world, with a focus on flagships. Our most recent project was the London flagship store on Oxford Street, which marks a new in-store digital direction and strategy for the brand.

What does a typical working day look like and where does it happen?
Typically, it starts with me leaving my flat in Nuremberg and driving 25 minutes to the small rural town of Herzogenaurach, where the Adidas HQ campus is located. It was decided to locate the HQ here to stay close to the heritage and birth place of the company’s founder Adolf Dassler. It’s also five minutes away from the Puma HQ as the founders of the two companies were estranged brothers and business rivals. I wouldn’t say there is ever a typical day, but usually I spend my time liaising with our creative and internal partners, as well as assisting with any hands-on design work that needs my attention. Being located in rural Bavaria means that it’s hugely important to continually research and discover what is happening both culturally and within the industry, as well as keeping strong ties and relations with our key creative partners, who are usually located outside of the region.

“The best aspect of my job would be collaborating with my design superheroes such as DIA, Builders Club and Field, among others.”

How collaborative is your role?
Most projects are very collaborative and often involve working with freelancers and creative agencies to craft our future brand expressions and digital experiences. I also collaborate internally with key stakeholders and teams such as Brand Design, ISC (In-store Communications) and Retail Concepts, to name but a few. Large scale retail projects, such as the London flagship store, generally take more than 18 months to complete. With many moving parts and components having to work seamlessly together and in the same language, this can only be achieved with strong teamwork.

What are the most and least enjoyable aspects of your job?
The best aspect of my job would be collaborating with my design superheroes such as DIA, Builders Club and Field, among others. The worst? Let’s just say it takes some time to change a ship’s course, and with large projects there’s many layers of authority that each experience or concept has to pass through at multiple stages of development.

What skills would you say are essential to your job?
Having a solid and precise creative vision is one thing, but the communication and collaboration needed to bring the vision to reality is far more crucial. We’re always trying to challenge our own preconceptions of the brand and its expression, and to do so requires others to step outside of their preconceptions with you. It’s key to build confidence in your collaborators, empowering and encouraging them to move beyond what they think the brand ‘is’ and find that creative irreverence ­– that’s when it gets really interesting in my opinion.

You moved from London to Germany – what was that like?
I cut my teeth working in London as a young designer and I found that city and industry really challenging. You’re at the epicentre of culture but most of what you earn goes into living costs; it’s like seeing the city through a glass window. Three years into starting my career in London I was offered a job with the new digitally-focused team within Brand Design at Adidas and after much deliberation I took it. This was also shortly after the Brexit vote, and following the unfortunate outcome (understatement of the year) it didn’t seem like the worst idea to switch currencies for a while. Living here certainly has its benefits in terms of work-life balance and that sense of focus you can achieve without all of the distractions, but there’s definitely things you miss about living in a culturally-rich and diverse city. Not to mention, my loving – and very patient – girlfriend and close friends still live in London. Luckily it’s fairly easy and cheap to fly back home, which has made me a Ryanair regular – a pretty challenging feat for a lanky 6’7 tall man like myself.

“I get bored very quickly and try to keep myself as creatively versatile as possible.”

Are you currently working on any personal projects?
I get bored very quickly and try to keep myself as creatively versatile as possible. I’m spending some of my spare time getting more familiar with 3D design; there’s so much to learn and I wish I had started years ago. I’ve also been chipping away at a short film I shot a few years ago in Cuba about a professional chess player I met during my travels, and I’m casually sinking endless spare hours into Ableton making pretentious and poorly constructed dance music. For me, the ultimate goal has always been to be a Swiss Army Knife as opposed to the perfect singular tool. Today, experiences consist of a multitude of communications and touchpoints working in harmony with one another, and the best way for me to understand the interplay is to be multidisciplined with my creative crafts and to know where to find those very sharp tools when I need them.

Is there a resource that has particularly helped you?
YouTube! Though, isolation in a very traditional rural town means there’s little exposure to design – unless you’re an admirer of the art of cabbage fermenting – and you can’t experience culture through Pinterest, so any relevant design conferences or key exhibits are always worth travelling to. I also listen to so many different podcasts. Ash Thorp is one of my hero’s – give his podcast The Collective a listen.

How do you think your upbringing influenced your choice of career?
It didn’t. There was no space on the photography course so I was forced to do graphic design (I like to think it worked out for me in the end). At the time I didn’t even know exactly what graphic design was. Soon after I became obsessed, starting with editorial design and the fundamentals of typography, then swiftly into moving image.

Did you study at degree level and if so, do you feel you need a formal education for what you do?
Yes, I did, and no, I absolutely don’t. University taught me how to learn, work experience (and the internet) taught me most of what I know. University isn’t the answer by any means, but I do think it’s an important step in finding your voice and building a perception of the world (albeit, a naive one), and without that it’s hard to creatively reflect and contribute.

After graduating, what were your initial steps?
Although I did well at university, I was very creatively self-conscious. It was tough to envision my place in the commercial world, as so many aspects of design interested me and I couldn’t see myself specialising in one particular thing. I wanted to take anything I could get my hands on, and soak up as much as I could before anyone released I didn’t know what I was doing. That was imposter syndrome creeping in. I saw a number of talented graduates come out of university with a sense of entitlement and a willingness to wait for that ‘dream job’ and I was painfully aware of not doing that. After the first couple of years of working as a moving image designer and then a communications designer, the work and the industry completely shifted my perception of what I thought ‘design’ was, as well as my career ambitions. This was the case after working at Eight Inc. and beginning to move more into the world of experience design, which I gravitated towards as it required a multidisciplinary approach in order to see how elements such as communications, physical space, products and behaviours work in concert, informing one another to form meaningful experiences. I’m trying to build a diverse and episodic career, moving when it feels right and bringing the learnings of where I’ve been to wherever I go next. I have to keep moving otherwise I can easily start to feel stagnant.

What’s been your biggest challenge along the way?
To the surprise of my friends and colleagues, I’m a fairly introverted person, so finding my voice and confidence were – and in some ways still are – challenging. For me, imposter syndrome and the fear of failure have been huge motivators to develop. I’ve always been ambitious and passionate about the work that I do and will push myself into uncomfortable creative territories to expand my skills and perspective. But thank God for the internet, and more specifically YouTube, because I’ve definitely pushed myself/blagged my way into sticky situations where I had to quickly learn something on the fly.

What have been your biggest learnings with making money as a creative?
That it shouldn’t be what drives you creatively. As Dave Chapelle said: “Money gives me choices, so it's not nothing, it's something. But it's not the end all, be all. There are other things in my life that I did not purchase with money that are very valuable.” It’s also important to know your worth and stay true to that. Value the work you do and what you can contribute and remember to tuck away 10% of your earnings for the times where no one cares for your contributions.

How important have you found social media and self-promotion in your work?
I struggle with social media to be honest. Having grown up during the internet revolution I can genuinely see the effects that social media and the constant connection to technology have had on me. Although it is necessary for me to use it, being somewhat isolated where I live, I also see it as a lazy form of cultural discovery. It can be a strong tool if you’re a great self-promotor, but I’m just not that kind of person.

What advice would you give to an emerging creative wanting to get into the same line of work?
Challenge your preconceptions of yourself and continue to learn outside of what you know. Diversifying what you seek to understand will keep your perspectives wide, allowing you to see new ways and directions. Also, nurture every fruitful creative (or business) relationship along the way, you never know where this nepotistic world will take you. In my case, Bavaria.

Written by Nils Westerlund
In the Studio With

Interview by Indi Davies
In the Studio With