“I felt there were stories that weren’t being told”: filmmaker and AMV BBDO creative, Esrael Alem

Knowing that the contacts he wanted to make were not to be found within the confines of university, Esrael Alem left his degree in media practice a year early. Actively chasing his filmmaking dreams on sets, he worked his way through multiple roles to learn his craft – from runner and production assistant, to camera car driver. It was during this time that he discovered, applied for and later won, filmmaking award ADCAN – a feat that propelled his career and scored him his first clients. Now embedded in the advertising world, Esrael balances his role as both a director and a creative at agency AMV BBDO, where he works alongside his creative partner, longtime friend and art director Filmawi Efrem. 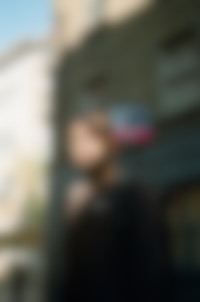 How would you describe what you do?
I am a director and a creative at AMV BBDO for clients such as Fiat, Doritos, Met Police and the National Lottery. The corporate way of describing what I do is that I come up with solutions for clients with business problems. As a creative, my work can span anything from games to a poster, film or stamp. We’re open to anything. First we will get a brief, which could come from a client or brand, maybe the problem will be that they want to appeal to a millennial audience, and are looking for a creative solution for that.

Then on the directing side, my work can vary, for example last year we created animated tour visuals for big screens [for Annie Mac]. We also write ideas for other creatives; so advertising creatives might write ideas, send them to us and say, “Can you direct this in your own style?” We would then interpret it and bring it to life in visual form.

What does a typical working day look like?
The majority of my day is spent looking at my creative partner in a white room, trying to come up with an idea for some kind of brief. We doodle, argue, laugh, watch silly memes and sometimes we get really emotional. If that becomes really hard, we then go on a walk and try to take pictures on the streets of south London.

The tools reuse are pretty simple: a laptop (it could be a MacBook Pro, it could be PC), a pencil, and a notebook. That’s about it.

What would you say is the most exciting project you've worked on in the last 12 months?
The most exciting project I’ve worked on in the last 12 months isn’t actually a project; it’s been more about curating our learning, if that makes sense. It was to look outwards and to realise what we’re doing and how we’re doing it, and to try to shape it so we get a better understanding of this industry and kind of figure out a way to move forward.

It’s not really like, “Oh, we made a commercial we like.” While we made some good commercials, and one of them picked up a nice little award [see the AD&D-winning Metropolitan Police commercial above], which was great. It was the fact that me and my best friend can sit down and work on our ideas together, whilst being paid.

How did your relationship with your creative partner come about, and how does it play out?
We met when we were 14 at a summer school for kids who could potentially go to university or hadn’t decided yet. It was on a black-and-white photography course. We were taught how to develop film and process it, screen print it.

I was being stupid, and we were like, “Oh yeah, you're funny, I'm funny.” We kind of got on from there and the relationship has lasted ten years. We made a lot of silly music videos before we decided to take it seriously. So, normally on New Year’s Eve, we’ll sit down, have breakfast that night and write goals for what we want to do that year. It’s really helped us up to this point.

“The most enjoyable part of working as a duo is having someone that can understand you with only half a sentence.”

What are the most and least enjoyable parts of your job?
The most enjoyable part of working as a duo is having someone that can understand you with only half a sentence, so you don’t have to fully explain yourself, but they get your vision, and can help you bring it to life. It’s really weird to say, but you complete each other’s thoughts, and you help it get built. That’s really important when you are trying to sell an idea to someone who has a lot of money, but hasn't got a lot of trust.

The hardest thing about working as a duo, or having a partner, is when you don’t understand each other; when you’re having to disagree on stuff, and you’re trying to find a way to see eye to eye. It’s like telling someone they’ve got bad ideas – it’s going to cause some friction.

I don’t think it was until I was in college – at 16 or 15 – that I thought I really wanted to become a director. I met two teachers who were really passionate about filmmaking. They would take their wage and make really obscure short films in the summer holidays, and that got me excited. I didn’t like them at the time, because they were teaching me things I didn't want to listen to, but I love them now, because I learnt about the things I now love, and want to carry on forever.

They recommended two of my favourite films of all time, and I hated them when I first watched them. They were directed by Jonathan Glazer and a film by Ken Loach; two really different filmmakers. Essentially, those two films are the building blocks of my career. They gave me the basis of my taste, palette, of how I want to make films or how I want to tell stories. These two directors and the way they told stories became the reason I wanted to tell underdog stories. So I ended up deciding to become a director because of really those two amazing teachers.

“I wanted to get into filmmaking to champion people who aren't championed – the little guy, the underdog.”

I also wanted to get into filmmaking purely because I felt there were stories that weren't being told. It might sound arrogant, but I felt I could tell them better than other people. Or that there might be a way of championing people who aren't championed – the little guy, the underdog. I wanted to be able to do that.

I wanted to get into advertising because I felt it was the perfect training ground to become a better director. Creatives think about ideas everyday; they’re able to shape an idea and get the best out of it. That isn't really a luxury for directors because most of the time, directors are jobbing, so they're trying to get the next thing to pay the bill, or they’re trying to make something. You can sometimes forget the importance of an idea. So, I thought if we honed our skills and were sharper thinkers, faster thinkers, that we would become better directors.

How (if at all) is the subject you studied useful to your current role?
I went to university at LCC [London College of Communication]. I did a degree called Media Practice, which was essentially a two-year degree with an option of third year. I decided to turn down the third year to pursue working in advertising and music videos. So I essentially did a foundation degree, which I have never used.

The decision to leave university came from a desire to make stuff, without the lacklustre university approach. I realised a lot of people I admired were people in the industry, and I decided to speak to them and ask what would be the best thing to do, and they told me to just do it. Just go out and make your own films and pursue your goal.

One guy in particular, a lighting technician, said something interesting. He said, "You want to be a director? Well, you have to start from the bottom. Do every job in the film industry to realise what those tasks and roles are, and then you'll become a director." That made me decide to leave school and become a runner, learning every job on a film set.

What were your first jobs?
Once I left university and became a runner, I started working for a really big production company. On my first day they sent me to a studio to paint the floor with just a roller. I remember that to this day and I was like, “I really don't ever want to do this again,” but that kind of pushed me to keep going.

The company were helping to fund a competition called ADCAN. So when the opportunity arose, Filmawi and I took part, and it kind of started a career for us, because we won the first year. We then had the chance to direct professionally, so it helped us get a leg up.

What would you like to do next?
I think, for our partnership, I feel our next goal is to bridge this gap between filmmaking and creative. We want to be both: the people that write the creative and direct the creative. We want to make the next Guinness ad, but we want to write it and direct it. That’s our goal. Sometimes it’s good to have a definitive goal, to set it on the wall and say, “I want to reach this level”, because then, once you get there, you can then set up another one. It’s like setting milestones.

What advice would you give to a young creative wanting to get into the same line of work?
There are, I think, three pieces of advice that I would give. First would be to listen to your mum; she’s always right. The second is something I’ve only just learnt recently – the idea of what importance and urgency are. When you’re creating work, you can muddle those things up. Sometimes you feel like something is important, but you don’t do it straight way – with urgency – because you’re trying to do everything at the same time. But it’s good to make time to look at work, leave it, look at it again. Do the overnight test and see if it still works. If you understand that already, it will help big time. I've only just understood it.

I think it’s also a good idea to take a step back, and take a look at your direction and work as a whole, and where you think it will take you. It’s useful to have a breather and understand where you’re headed, before you make all the effort to get there. Then decide whether that’s where you want to go. That’s the main thing.

Interview by Indi Davies and
Creative Lives
“It’s not all Don Drapers and Peggy Olsens, thankfully” – meet copywriter at DesignStudio, Louie Zeegen
Parts of the Process