Starting out as an illustrator? Apply for our next portfolio review

Calling all illustrators taking their first steps in the working world: Our next portfolio review, on Thursday 29th April, has been designed especially for you! This is your chance to meet and get feedback from inspiring names in the industry – with creatives from Grand Matter, Jelly and It’s Nice That joining us on the day. Read on for how to get involved...

The session is open to those based in the UK and looking to get into illustration, with no more than one year of experience in the industry. You will need to have something to show, but don’t worry if this isn’t a polished portfolio.

The session will take place over Zoom on Thursday 29th April 2021, from 5pm to 8pm GMT. There are only a limited number of places available, so make sure you sign up to register your interest by 16th April.

The event itself is fast-paced: In breakout rooms of three emerging creatives and one reviewer, you will get the opportunity to show and discuss work, and get advice and feedback. This will then rotate, so you get to meet several reviewers through the evening.

Lou Bones, illustration and animation agent, Jelly London
As an agent for award-winning artist management agency Jelly London, Lou represents and supports a host of world-class illustrators and animators from all over the globe. Jelly itself was founded over 15 years ago, and boasts a roster that includes Marylou Favre and Kelly Anna. Before that, Lou worked at the Association of Illustrators, where she helped a huge number of illustrators build their careers.

Raj Dhunna, illustrator
With a bold and colourful body of work that includes collaborations with the likes of Adidas, Nike, The Face, BBC and The Guardian, Raj has built an impressive illustration career since graduating from Birmingham City University in 2014. In addition to illustrating, Raj also works as freelance digital designer, and has experience of being a tutor – with years of experience in helping students get the most out of their work and studies.


Ciara Phelan, co-founder and creative director, Grand Matter
With a background in design, Ciara initially built her career as an illustrator before co-founding artist agency Grand Matter in 2017. Now representing illustrators and makers from all over the globe, Ciara is also one of the founding forces behind Agents for Change – an initiative on a mission to create a more diverse industry, powered by leading figures across the illustration world. Launched in 2021, the platform offers advice, events and resources for under-represented people of all ages.


Will Knight, art director, It’s Nice That
As an art director at It’s Nice That, Will works with a close-knit creative team across editorial projects and commercial partnerships, collaborating with a wide range of both emerging and established talent. Having graduated from Brighton University with a BA in graphic design in 2016, Will has also maintained his freelance practice, previously working with clients including Vans, Island Records, Universal Music and Rapha.

This session is open to students, grads, or those within the first year of a creative career. Please note you are only eligible to register if you are:

Register your interest by midnight, 16th April via the link below. 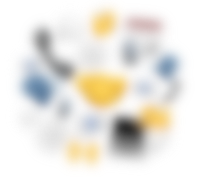 Ten key tips that will help you get ahead as an illustrator, by Erin Aniker

What illustrator Michael Driver learnt from a rollercoaster ride with money

Written by Indi Davies
Creative Lives
“I still can’t believe I get to do this for a living!” Meet Belfast-based illustrator and animator, Priya Mistry
COOKIES